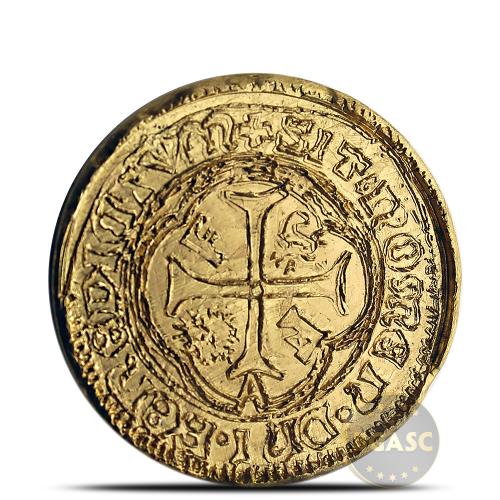 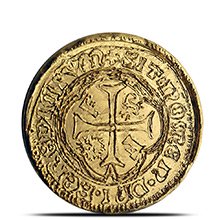 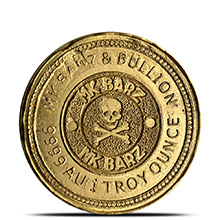 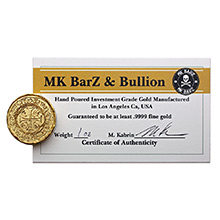 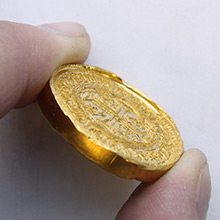 The 1 oz Gold Pirate Treasure Spanish Doubloon Round is a unique, hand crafted, pure 24kt gold bullion round designed to look “old” in homage to pirate treasure coins of the past. No two rounds are exactly alike as they have been purposely hand struck slightly off center with a rustic finish to add to the look of old world charm. An MK BarZ Certificate of Authenticity (COA) is included with this gold round to guarantee the weight and fineness by the mint.

The obverse of this 1 oz Gold “Spanish Doubloon” pirate treasure round honors classic Spanish Doubloon coins, complete with the common Latin inscription “Sit nomen Domini benedictum” (Blessed be the name of the Lord). The reverse of the Pirate Treasure Spanish Doubloon round is stamped with the piece’s weight, fineness, and the MK BarZ skull and crossbones maker’s mark.

The original “Spanish Doubloon” was a gold coin minted in Spain, Mexico, and the Spanish settlement of Nueva Grenada (present-day Peru) that was used widely known in the Americas until the mid-nineteenth century. The word “doubloon” has its roots in the Latin word “duplus”, meaning double, a reference to the denomination of this coin worth “two escudos”. These coins were eventually minted in four different denominations (worth one, two, four, and eight escudos respectively), but the term “doubloon” has become widely used to refer to most historical Spanish coins with a similar design, and often in association with pirate folklore.

Every single one of these 1 oz Gold Pirate Treasure Spanish Doubloon rounds are hand stamped on both sides the old fashioned way. Imagining the labor involved to produce large quantities of these fractional silver rounds makes us appreciate them even more!

MK BARZ AND BULLION is a family owned and operated private mint based in Los Angeles, California specializing in hand poured silver bullion and American coins exclusively minted in the United States. With over 30 years of experience, MK BARZ specializes in hand-poured silver bars and rounds with unique designs that appeal to collectors and investors alike.