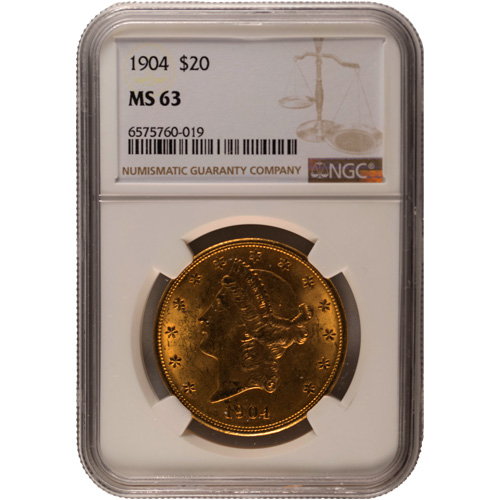 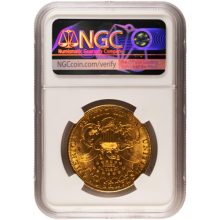 From 1795 to 1933, the United States Mint issued gold coins for use in circulation. The $10, $5, and $2.50 denominations were available from start to finish in this series, but the $20 Double Eagle did not debut until after the California Gold Rush. However, it would go on to be arguably the most memorable in the series. Right now, BGASC has certified 1904 $20 Liberty Gold Double Eagle Coins available to purchase online.

BGASC is pleased to offer the 1904 $20 Liberty Gold Double Eagle Coin in this product listing in Mint State 63 condition. Coins in this condition exhibit impaired mint luster, small contact marks, a few heavier marks, small hairlines that are visible without magnification, and other minor detractions.

Lady Liberty is on the obverse of 1904 Liberty Gold Double Eagle Coins. This design was created by James B. Longacre in 1849 for the Gold Double Eagle and used through 1907, making it the longest-running design of the two featured in this denomination.

The heraldic eagle is featured in the reverse of $20 Liberty Gold Double Eagle Coins. Also designed by Longacre, it is inspired by the Great Seal of the United States and offers an ornate version of the heraldic eagle. This design was also used from 1849 to 1907.

Most 1904 Liberty Gold Double Eagles were used for the same purpose as most circulation American gold coins in the 20th century: international trade. Most of the 6.2 million coins issued in 1904 in this denomination ended up in France or England as a result of international trade. Those that remained in the US were melted in the 1930s. Just 5% of the original mintage is believed to survive today in Mint State conditions. Most of those are below the MS63 grade.