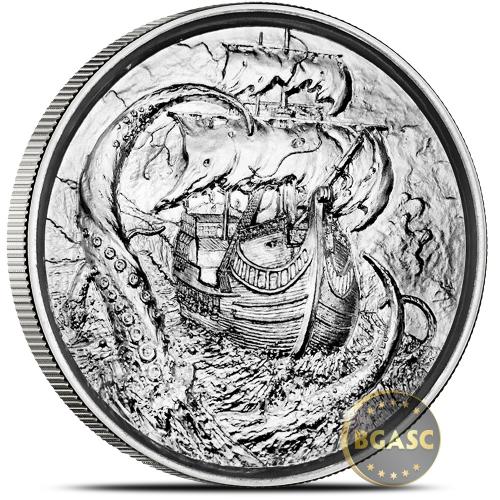 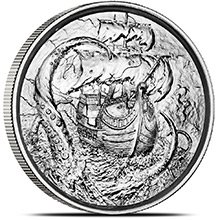 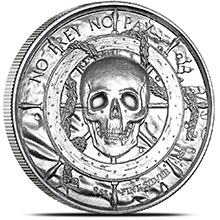 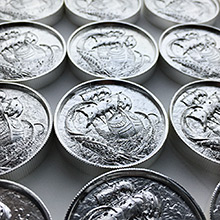 The 2 oz Kraken Privateer Ultra High Relief Silver Round (P4) (also known as The Kraken Round) is the 4th release in the Privateer Series by the Elemetal Mint.

Add a Small Wooden Treasure Chest to your order for a fun way to store and display your 2 oz Silver Kraken Rounds!

The reverse of the 2 oz Silver Kraken Round features a pirate ship with wind-worn sails, much like the one on the original Privateer round, about to be overtaken by the giant, octopus-like sea-creature known in classic folklore and myth as “The Kraken”. In this exciting scene, the Kraken’s huge tentacles tower over the ship, threatening its demise.

Like its predecessors, the 2 oz Silver Privateer Round (P1), 2 oz Silver Siren Round (P2), and 2 oz Silver Captain Round (P3), the obverse of the 2 oz Kraken Round prominently features the familiar pirate’s motto, “NO PREY NO PAY” which means that unless the privateer’s raid on another ship’s bounty was successful, no one gets paid! Also featured on the obverse of the 2 oz Pirate Rounds is a large pirate skull on top of a ship’s wheel wrapped in line, and the inscription “2 OZ FINE SILVER .999”. The background of the obverse’s design, or the “field”, is reminiscent of a tallship’s sail, weather beaten and torn to reveal a hint of mirrored proof-like finish behind it.

Elemetal is the new brand name for a long-standing partnership between OPM Metals (Ohio Precious Metals) and NTR Metals (North Texas Refinery). Both entities have a solid record of producing quality precious metals bullion products that can be offered at an affordable price to our customers, and the 2 oz Ultra High Relief Kraken Rounds are no different.

Individual Kraken rounds are carefully pulled out of brand new tubes from Elemetal Mint with lint-free cotton gloves and placed into a protective poly bag for shipment. BGASC always handles your silver rounds with the utmost care and respect, as if we were collecting them ourselves. Quantities of 10 are shipped in unopened mint tubes. If you plan to store these 2 oz silver rounds outside of the mint tube, you may consider adding a BGASC Velveteen Treasure Bag to your order.