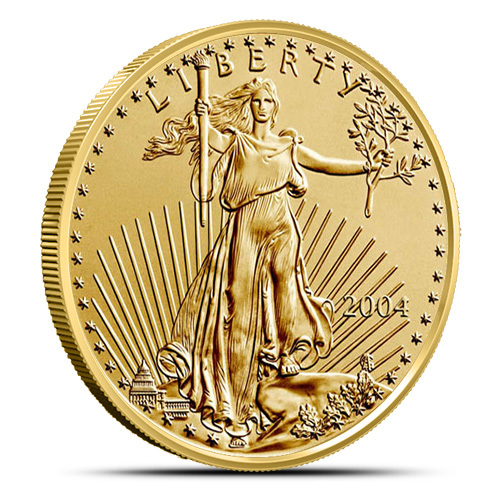 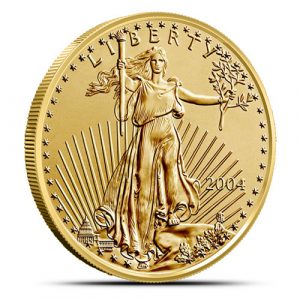 Among the lowest-minted coins in the history of the American Eagle Gold Series is the 2004 release. Issued at a time of falling mintages in the early 2000s, the 2004 release had a mintage of just over 400,000 and was just under 1,000 coins higher in demand than the previous year in 2003. Right now, you can get 2004 American Eagle 1 oz Gold Coins online at Provident Metals.

Provident Metals is happy to offer the 2004 American Eagle 1 oz Gold Coin to you through this product listing in Brilliant Uncirculated condition. The coins listed here come with individual plastic flips for shipping.

Lady Liberty is depicted in front-facing relief on the obverse of 2004 American Eagle 1 oz Gold Coins. This design was created in 1907 by Augustus Saint-Gaudens and was the last to grace the Double Eagle Gold Coin issued by the US Mint. The design shows Liberty walking away from Washington D.C. The US Capitol Building is at her feet in the background with her frame silhouetted by rays of sunshine. She holds out a torch in her right hand and an olive branch in her left. A ring of 50 stars encircles the entire design element. Inscriptions read Liberty and 2004.

A family of American bald eagles is depicted in and around the nest on the reverse side of 2004 American Eagle Gold Coins. This design was developed exclusively for this coin series in 1986 by Miley Busiek. It includes a male eagle in flight above the nest, with a female eagle sheltering a hatchling within the nest below. Inscriptions include United States of America, In God We Trust, E Pluribus Unum, and 1 oz. Fine Gold 50 Dollars.

If you have questions, Provident Metals has answers. Please call us on the phone at 800-313-3315, chat with us live online, or email us directly.