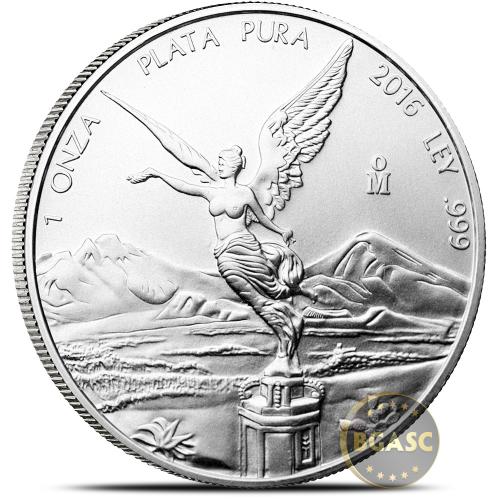 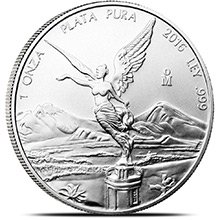 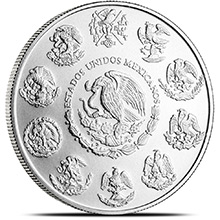 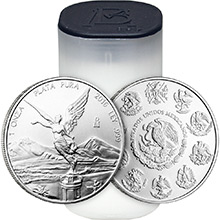 The 2016 1 oz Silver Mexican Libertad Coin is a troy ounce .999 fine silver bullion coin minted by Casa de Moneda de Mexico (also known as the Mint of Mexico), the oldest mint in North America, founded in 1535. The Mexican Libertad coin has become a highly desirable and sought after 1 ounce silver bullion coin due to its limited mintage, breathtaking design and beautiful satin finish. Unlike other sovereign bullion coins, the Silver Libertad does not have a nominal Mexican currency value or denomination because the Central Bank of Mexico decided that from the get-go the value of the coin should be based on the market price (spot price) of silver plus a small premium.

Reverse Design
Though the Winged Victory side of the Libertad is technically the reverse side, it is the more popular and recognizable side of the coin. El Angel de la Independencia (The Angel of Independence) design on the Mexican Libertad pays tribute to the famous statue of Winged Victory located in downtown Mexico City. The solid bronze statue itself is covered in 24k gold, weighing in at a whopping 7 tons and is full of symbolism. In her right hand El Angel holds a laurel crown symbolizing Victory and in her left hand is a broken chain, symbolizing Freedom (or “Libertad” in Spanish). The coin’s weight, purity and year of mintage also appear in Spanish on this side. When the Mexican Mint began production of the 1 Onza Silver Libertad in 1982, it featured the Centanario Winged Victory Angel design taken from Mexico’s 50-peso gold bullion coin. In 1996 the Mexican Mint updated the reverse design with a new Winged Victory Angel design which can still be seen on the current year coin.

Obverse Design
The central design of the Silver Libertad’s obverse features Mexico’s National Coat of Arms depicting a Mexican Eagle perched on a cactus with a snake in its beak, accompanied by the inscription “ESTADOS UNIDOS MEXICANOS”. Encircling the central coat of arms are various other Coat of Arms designs used throughout Mexico’s history.

Mintage
The Mint of Mexico is responsible for minting legal tender coins within the country, according to the characteristics and denominations established by the decrees issued by the Mexican Congress and the guidelines set forth by the Banco de Mexico. In recent years the 1 ounce Silver Libertad has seen mintages as low as 200,000 coins and as high as 1,650,000 for the entire year which is dramatically lower than other government minted bullion coins.

Packaging
Bulk packaging of Silver Libertad coins is unique in that they come in sealed bank bags printed with Banco de Mexico’s BM logo directly from the Mexican Mint. The bag seal is marked with a unique serial number, the type of coins, quantity, purity, and weight. Each bank bag contains 18 tubes of coins, each tube containing 25 Silver Libertad coins for a total of 450 coins per bag.

Purchasing
These 2016 Silver Libertads are brand new from the Mint of Mexico, stored in mint-sealed bank bags until ordered by you. You may purchase sealed bags of 2016 1 oz Silver Libertads from us (450 coins) or you may order them in any other quantity you’d like. Quantities of 25 are shipped in unopened mint rolls. Single and smaller quantities of coins are carefully pulled from a new mint roll with lint-free, white cotton gloves and placed into their own individual coin flips. BGASC always handles your coins with the utmost care and respect, as if we were collecting them ourselves. You may choose to add an H40 Air-Tite Coin Capsule to your order to further protect your investment. 1 oz Silver Libertad gift boxes are also available. If you have any questions about these coins or the purchasing process, feel free to call us toll-free and one of our representatives will be happy to assist you.