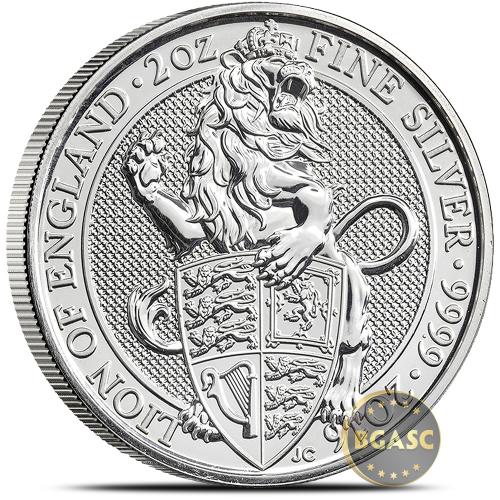 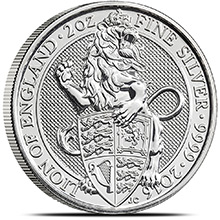 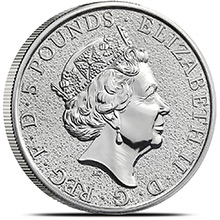 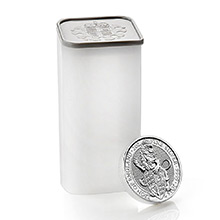 The 2016 Queen’s Beast 2 oz Silver Bullion Coin – The Lion is the first release of the 10-coin series. This new addition to The Royal Mint’s bullion range takes its inspiration from hundreds of years of royal heraldry. The Queen’s Beasts bullion coins not only provide a new option for those looking to invest, but the range also includes a two-ounce silver coin – the first time an official two-ounce United Kingdom bullion coin has been struck.

Reverse
The reverse features a stylized rendition of the crowned Lion of England surrounded by the text “LION OF ENGLAND 2 oz FINE SILVER 999.9 2016”. The initials of the artist Jody Clark appear just below shield offset to the right.

The Lion of England
The Lion of England is the first of the beasts to be introduced in this new bullion coin series. It is perhaps one of the more familiar beasts in the series, given it’s appearance on the Royal Arms the arms of the monarch and the United Kingdom. It is one of two beasts to feature on the Royal Arms, as both the Scottish Unicorn and the English Lion are shown supporting a quartered shield.

The crowned golden Lion of England has been one of the supporters of the Royal Arms since King James I came to the throne in 1603, but the symbol of a lion has represented England for far longer. Richard the Lion-heart, son of King Henry II, is famed for his three golden lions as the Royal Arms of England, and since the twelfth century, lions have appeared on the coat of arms of every British monarch.

Buying from BGASC
The 2 oz Queen’s Beast Coins you purchase from BGASC are brilliant uncirculated silver bullion coins from The Royal Mint of Great Britain. Quantities of 10 are shipped in unopened mint tubes. Single and smaller quantities of coins are carefully pulled from a new mint tube with lint-free, white cotton gloves and placed into their own individual coin flips. You may also want to consider purchasing an X6D38 Air-Tite Coin Capsule to further protect your investment. BGASC always handles your coins with the utmost care and respect, as if we were collecting them ourselves. If you have any questions about these coins or the purchasing process, feel free to call us toll-free and one of our representatives will be happy to assist you.