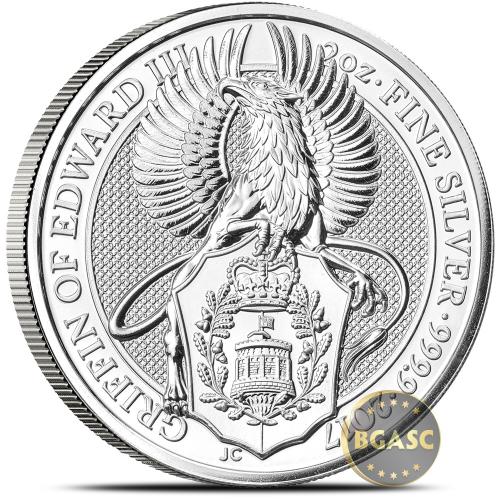 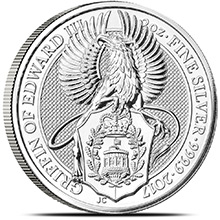 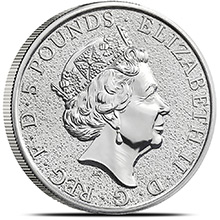 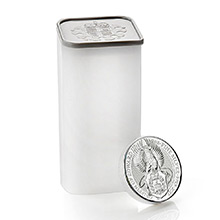 The 2017 Queen’s Beast 2 oz Silver Bullion Coin – The Griffin is the second release of the 10-coin series. This recent addition to The Royal Mint’s bullion range takes its inspiration from hundreds of years of royal heraldry. The Queen’s Beasts bullion coins not only provide a new option for those looking to invest, but the range also includes two-ounce silver coins – the first official two-ounce United Kingdom bullion coins ever struck.

The background for this range comes from the coronation of Her Majesty The Queen, where ten heraldic beasts stood guard, The Queen’s Beasts, sculpted by James Woodford RA for the coronation ceremony. The coins each depict one of the The Queen’s Beasts, reimagined by Royal Mint Coin Designer Jody Clark. Jody also created the latest definitive coinage portrait of The Queen to appear on United Kingdom coins. His bold interpretations of the Lion of England was the first coin released of the series, and is now followed by the Griffin, associated with Edward III.

Reverse
The reverse features a stylized rendition of the Griffin of Edward III surrounded by the text “GRIFFIN OF EDWARD III 2 oz FINE SILVER 999.9 2017”. The initials of the artist Jody Clark appear just below shield offset to the left.

The Griffin of Edward III
The griffin of Edward III Queen’s Beast is an ancient mythical beast. It was considered a beneficent creature, signifying courage and strength combined with guardianship, vigilance, swiftness and keen vision. It was closely associated with Edward III who engraved it on his private seal. The shield shows the Round Tower of Windsor Castle (where Edward III was born) with the Royal Standard flying from the turret, enclosed by two branches of oak surmounted by the royal crown.