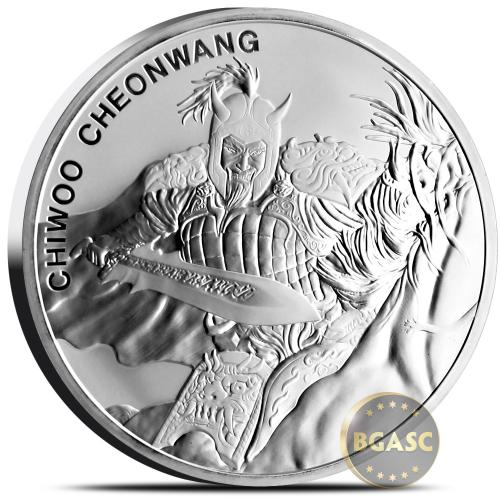 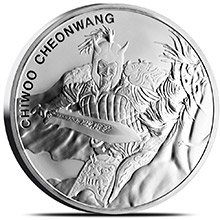 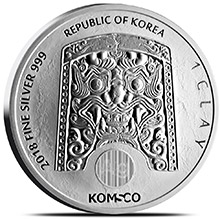 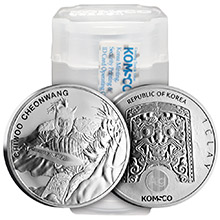 The South Korea 2018 1 oz Silver Chiwoo Cheonwang is a silver bullion medallion made by the Korea Minting and Security Printing Corporation (KOMSCO). As the official mint of South Korea, KOMSCO is responsible for the printing and minting of banknotes, coins and other government documents. 2018 marks the third release for the Silver Chiwoo Cheonwang bullion medal, and has a limited mintage of 45,000 units made.

Chiwoocheonwang
Chiwoocheonwang is known as the 14th son of god in the ancient Baedal, known to be the first nation of Korea. It is also a symbol of the god of soldiers and the mascot of “the Red Devils”, the Korean cheerleading team for the official South Korean soccer team.

Obverse
The front of the Silver Chiwoo includes the image of “Guimyeonwa” – also known as a “Goblin Tile” – which is a decorative tile used on rooftops of homes and temples to ward off evil spirits, fire, etc. and serves as the motif for the form of “Chiwoocheonwang”. Below the goblin tile is the small, circular latent image security feature which reveals “Ag” or “999” depending on the angle. This security feature being difficult to reproduce helps to prevent forgery. Around the outer edge of the design are the inscriptions, “2018 FINE SILVER 999”, “REPUBLIC OF KOREA”, “1 CLAY”, and the mint’s hallmark “KOMSCO”.

Reverse
On the back of the round is the image of “Chiwoocheonwang” riding a horse and weilding a sword with a fierce look in his eyes and teeth gnashed in a confident grin. The “Guimyeonwa” (goblin tiles) act as shoulder guards and other features of Chiwoo’s armor as he rides forward into battle. In the upper left is the inscription, “CHIWOO CHEONWANG”.

New Concept “1 CLAY”
Though the Chiwoo Cheonwang medallion carries no face value, nor is it legal tender, a new unit of measurement developed by KOMSCO is inscribed on the obverse of the medal: “1 CLAY”. Clay is not only what the Guimyeonwa goblin tiles are made from, but is also considered to be “of the soil”, which is where the silver was originally derived for these medals.

These 2018 Silver Chiwoo Medals are brand new, imported by BGASC from the South Korean Mint, and stored in mint-sealed packaging until shipped. Quantities of 25 medals are shipped in unopened mint tubes. Single and smaller quantities of medals are carefully pulled from mint tube with lint-free cotton gloves and placed into a coin flip for storage. BGASC always handles your precious metals with the utmost care and respect, as if we were collecting them ourselves. If you have any questions about these silver medals or the purchasing process, feel free to call us toll-free and one of our representatives will be happy to assist you.