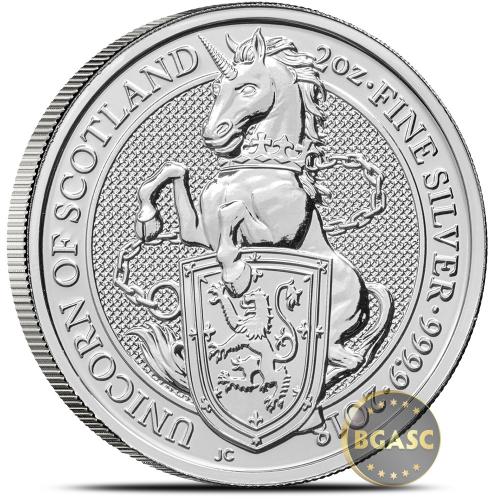 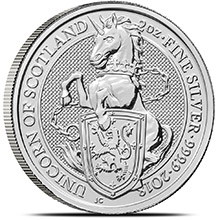 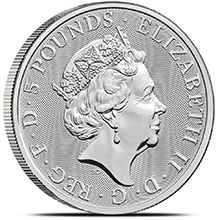 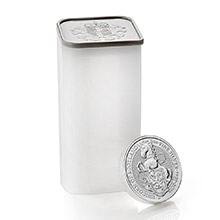 The Queen’s Beast 2 oz Silver Bullion Coin – The Unicorn of Scotland. This addition to The Royal Mint’s bullion range takes its inspiration from hundreds of years of royal heraldry. The Queen’s Beasts bullion coins not only provide a new option for those looking to invest, but the range also includes two-ounce silver coins – the first official two-ounce United Kingdom bullion coins ever struck.

Reverse
The reverse features a stylized rendition of the The Unicorn of Scotland surrounded by the text “UNICORN OF SCOTLAND 2 oz FINE SILVER 999.9” and date of mintage. The initials of the artist Jody Clark appear just below shield offset to the left.

The Unicorn of Scotland
The Unicorn of Scotland, milk-white with gold hooves, horn and mane, has a coronet around its neck, like a collar, with a gold chain attached. It is thought that the chains were to show a great beast tamed to serve the king. As with most chained beasts in heraldry, its strength is emphasised rather than diminished by its shackles. It holds the royal coat of Scotland, unchanged since the time of Scottish king, Alexander III. A red lion rampant (the most fierce stance) is shown on a gold background.

Tales of the mythical unicorn date back to around 400 BC, perhaps confused or exaggerated descriptions of animals like the rhinoceros or wild bulls and horses. The creature was at first thought to be huge, strong and fierce, and later a more elegant beast, a symbol of purity and innocence. James I of England, who united the English and Scottish thrones, chose the Scottish Unicorn to join the Lion of England in supporting the Royal Arms. They have supported the shield ever since.