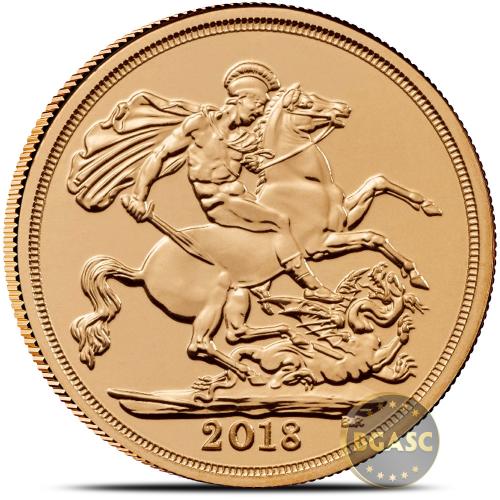 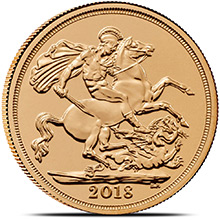 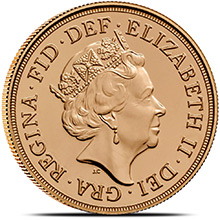 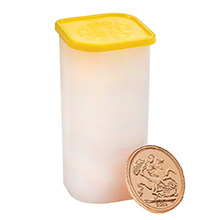 The 2018 Gold Sovereign coin from The Royal Mint features Benedetto Pistrucci’s original St George and the dragon design. The Sovereign is The Royal Mint’s 22 carat gold flagship coin and has been a constant of British coinage, admired and trusted through times of change.

The Gold Sovereign offers a sense of luxury, history and symbolism that no other bullion coin can match. With its bold St George and the Dragon design, it has become an internationally recognized symbol of unrivaled accuracy, integrity and strength. Each Gold Sovereign is struck to the same precise standard as every Sovereign since 1817.

A circulating coin, it was struck in 916.7 fine gold to withstand daily use and it is struck from that same durable, 22 karat gold today. Adorned by the renowned engraver Benedetto Pistrucci’s iconic Saint George and the dragon design, which has endured for 200 years.

Pistrucci’s interest in St George had been aroused by Lady Spencer, to whom he had been introduced by Sir Joseph Banks, President of the Royal Society and friend of William Wellesley Pole, then Master of the Mint. Her Ladyship showed Pistrucci a wax model of Saint George and asked him to make another ‘in the Greek style’. Lady Spencer had no time for a figure dressed in gothic armour, an appealing sentiment to the Italian, whose favorite maxim was said to be ‘study Greek originals day and night’. Pistrucci’s iconic design first appeared on The Sovereign in 1817, instantly distinctive it became a classic and still endures 200+ years later.