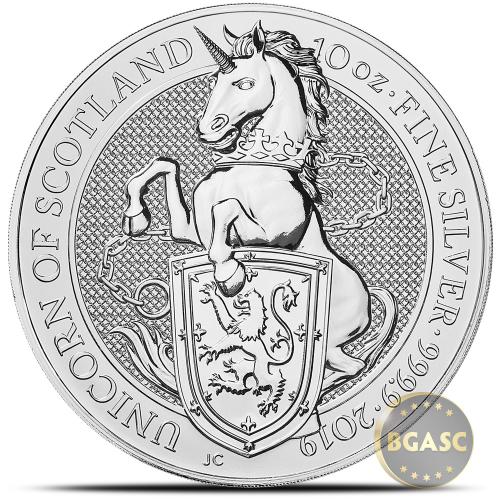 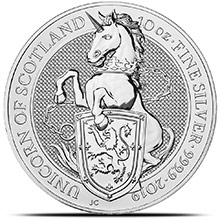 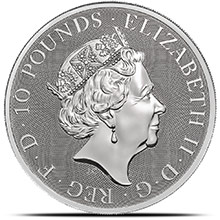 The 2019 Queen’s Beast 10 oz Silver Bullion Coin – The Unicorn is the 10 troy ounce version of the fourth design released of the 10-coin series and comes packaged in a mint-issued protective coin capsule. Following the initial success of the series, The Royal Mint has begun offering an official ten-ounce United Kingdom bullion coin bearing the heraldic beast design. This addition to The Royal Mint’s bullion range takes its inspiration from hundreds of years of royal heraldry.

Obverse
The obverse features the 5th definitive coinage Portrait of Queen Elizabeth II, surrounded by the text “ELIZABETH II D G REG F D 10 POUNDS”. DG REG FD is an abbreviation of the latin “Dei Gratia Regina Fidei Defensor” meaning; “Grace of God, Queen, Defender of the Faith” and is a form of the Style of the British sovereign of Queen Elizabeth II common on coins of the Pound Sterling. The initials of the artist Jody Clark appear just below the portrait.

Reverse
The reverse features a stylized rendition of the The Unicorn of Scotland surrounded by the text “UNICORN OF SCOTLAND 10 oz FINE SILVER 999.9” and date of mintage. The initials of the artist Jody Clark appear just below shield offset to the left.

The Unicorn of Scotland
The Unicorn of Scotland, milk-white with gold hooves, horn and mane, has a coronet around its neck, like a collar, with a gold chain attached. It is thought that the chains were to show a great beast tamed to serve the king. As with most chained beasts in heraldry, its strength is emphasized rather than diminished by its shackles. It holds the royal coat of Scotland, unchanged since the time of Scottish king, Alexander III. A red lion rampant (the most fierce stance) is shown on a gold background.

Tales of the mythical unicorn date back to around 400 BC, perhaps confused or exaggerated descriptions of animals like the rhinoceros or wild bulls and horses. The creature was at first thought to be huge, strong and fierce, and later a more elegant beast, a symbol of purity and innocence. James I of England, who united the English and Scottish thrones, chose the Scottish Unicorn to join the Lion of England in supporting the Royal Arms. They have supported the shield ever since.

Buying from BGASC
The 10 oz Queen’s Beast Coins you purchase from BGASC are brand new, brilliant uncirculated silver bullion coins fresh from The Royal Mint of Great Britain. Each coin comes encased in a mint-issued hard plastic coin capsule. BGASC always handles your coins with the utmost care and respect, as if we were collecting them ourselves. If you have any questions about these coins or the purchasing process, feel free to call us toll-free and one of our representatives will be happy to assist you.