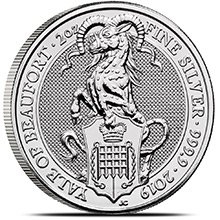 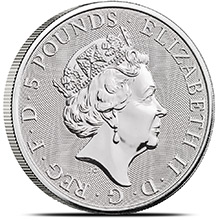 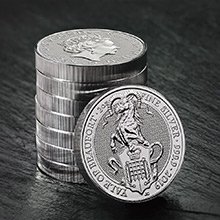 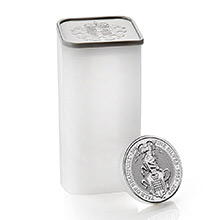 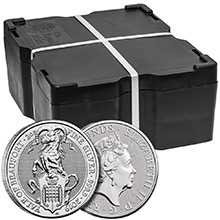 The Queen’s Beast 2 oz Silver Bullion Coin – The Yale of Beaufort. This addition to The Royal Mint’s bullion range takes its inspiration from hundreds of years of royal heraldry. The Queen’s Beasts bullion coins not only provide a new option for those looking to invest, but the range also includes two-ounce silver coins – the first official two-ounce United Kingdom bullion coins ever struck.

Reverse
The reverse features a stylized rendition of the The Yale of Beaufort surrounded by the text “YALE OF BEAUFORT 2 oz FINE SILVER 999.9 2019”. The initials of the artist Jody Clark appear just below shield offset to the left.

The Yale of Beaufort
The Yale was a mythical beast, supposedly white and covered with gold spots and able to swivel each of its horns independently. It descends to the Queen through Henry VII, who inherited it from his mother, Lady Margaret Beaufort. The shield shows a portcullis surmounted by a royal crown. The portcullis (uncrowned) was a Beaufort badge, but was used both crowned and uncrowned by Henry VII.