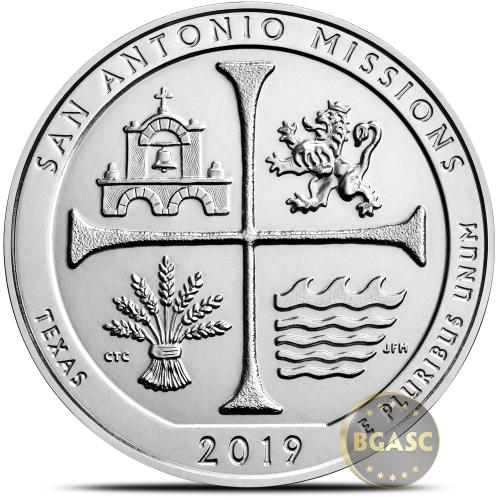 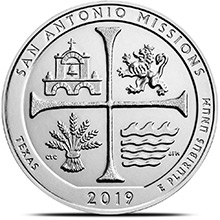 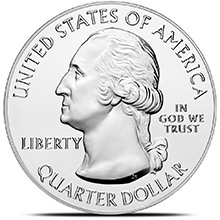 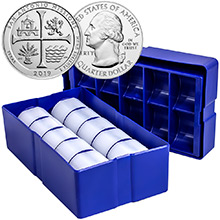 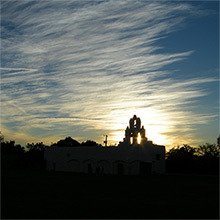 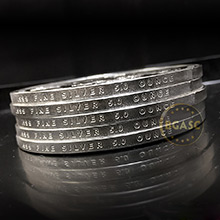 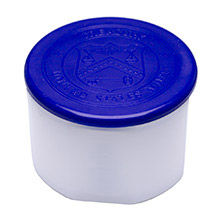 This Brilliant Uncirculated 2019 San Antonio Missions Texas 5 oz Silver America The Beautiful .999 Fine Bullion Coin is the fourth of 2019 and the 49th overall in the America the Beautiful Coins Program. The reverse design of this silver bullion coin depicts elements of the Spanish Colonial Real coin to pay tribute to the missions. Within the quadrants are symbols of the missions: wheat symbolizes farming; the arches and bell symbolize community; a lion represents Spanish cultural heritage; and a symbol of the San Antonio River represents irrigation methods and life-sustaining resources. Design candidates were developed in consultation with representatives of the San Antonio Missions. Inscriptions are “SAN ANTONIO MISSIONS,” “TEXAS,” “2019,” and “E PLURIBUS UNUM.”

The San Antonio Missions were among the largest concentrations of Spanish missions in North America, established in the 1700s, and helped create the foundation for the City of San Antonio, TX. The construction of aqueducts and irrigation canals (acequias) brought water to the missions sustaining farming and ranching. The missions’ toolmaking, carpentry, looming, spinning, and masonry also contributed to the community’s ability to be self-sustaining.

After 10,000 years, the people of South Texas found their cultures, their very lives under attack. In the early 1700s Apache raided from the north, deadly diseases traveled from Mexico, and drought lingered. Survival lay in the missions. By entering a mission, they foreswore their traditional life to become Spanish, accepting a new religion and pledging fealty to a distant and unseen king.

The 5 oz silver America The Beautiful Coins (ATB’s) all resemble a Washington quarter but are significantly larger (76.20 millimeter diameter) and contain 99.9% silver at a weight of 155.5 grams. Each coin depicts a United States National Park on the reverse and John Flanagan’s 1932 portrait of George Washington on the obverse. Inscriptions on the obverse are UNITED STATES OF AMERICA, LIBERTY, IN GOD WE TRUST, and QUARTER DOLLAR. The edges of these 5 oz silver bullion coins are smooth and contain the incused inscription: .999 FINE SILVER 5.0 OUNCE. The coin will be sent to you in a protective Capsule.