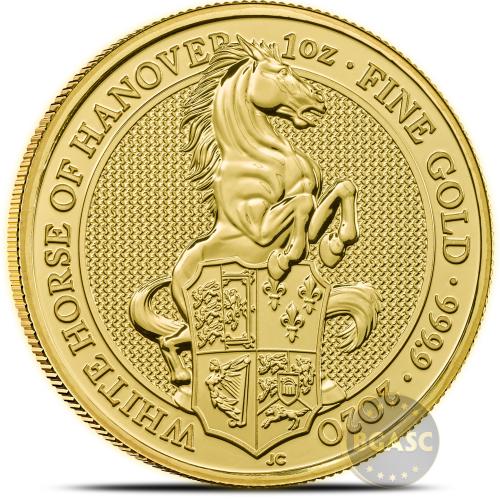 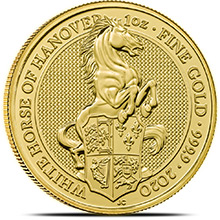 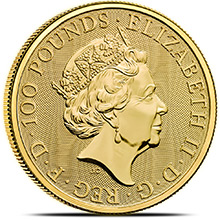 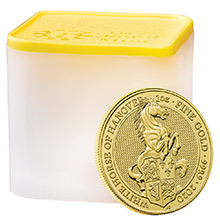 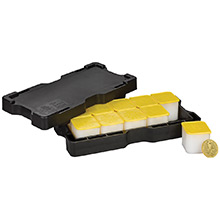 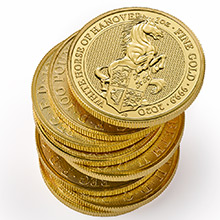 The Queen’s Beast 1 oz Gold Bullion Coin – The White Horse of Hanover. This addition to The Royal Mint’s bullion range takes its inspiration from hundreds of years of royal heraldry. The Queen’s Beasts bullion coins not only provide a new option for those looking to invest, but the range also includes two-ounce silver coins – the first official two-ounce United Kingdom bullion coins ever struck.

Reverse
The reverse features a stylized rendition of the The White Horse of Hanover surrounded by the text “WHITE HORSE OF HANOVER 1 oz FINE GOLD 999.9” and date of mintage. The initials of the artist Jody Clark appear just below shield offset to the left.

The White Horse of Hanover
With the death of the last of the Stuarts, Queen Anne, in 1714, the British throne passed to George of Hanover, who became known as George I. He brought with him the heraldry of the region, including a White Horse on a red background, known in German as the “Sachsenross” and in English as “the White Horse of Hanover.” While the horse is a relatively small part of George I’s Royal Arms, it held important significance. As well as appearing on all military uniforms of the period, the white horse also featured on royal badges of office and was central to the insignia of the Order of the Bath and the Hanoverian Guelphic Order. And if you’ve ever wondered why there are so many establishments called “The White Horse”, it’s due to a tradition in Britain of naming public houses after symbols in heraldic badges – the perfect expression of loyalty to the new ruling dynasty.

Buying from BGASC
The 1 oz Gold Queen’s Beast Coins you purchase from BGASC are brand new, brilliant uncirculated gold bullion coins fresh from The Royal Mint of Great Britain. Quantities of 10 are shipped in unopened mint tubes. Single and smaller quantities of coins are carefully pulled from a new mint tube with lint-free, white cotton gloves and placed into their own individual coin flips. You may also want to consider purchasing an H32 Air-Tite Coin Capsule to further protect your investment. BGASC always handles your coins with the utmost care and respect, as if we were collecting them ourselves. If you have any questions about these coins or the purchasing process, feel free to call us toll-free and one of our representatives will be happy to assist you.