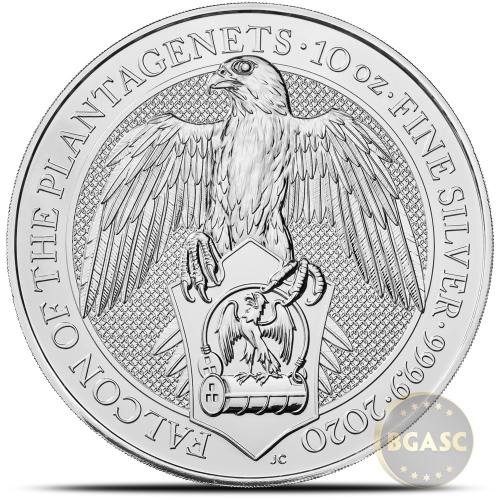 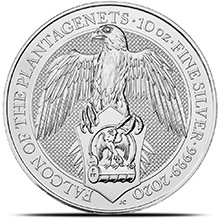 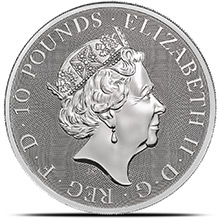 The 2020 Queen’s Beast 10 oz Silver Bullion Coin – The Falcon of the Plantagenets is the 10 troy ounce version of the sixth design released of the 10-coin series and comes packaged in a mint-issued protective coin capsule. Following the initial success of the series, The Royal Mint has begun offering an official ten-ounce United Kingdom bullion coin bearing the heraldic beast design. This addition to The Royal Mint’s bullion range takes its inspiration from hundreds of years of royal heraldry.

Obverse
The obverse features the 5th definitive coinage Portrait of Queen Elizabeth II, surrounded by the text “ELIZABETH II D G REG F D 10 POUNDS”. DG REG FD is an abbreviation of the latin “Dei Gratia Regina Fidei Defensor” meaning; “Grace of God, Queen, Defender of the Faith” and is a form of the Style of the British sovereign of Queen Elizabeth II common on coins of the Pound Sterling. The initials of the artist Jody Clark appear just below the portrait.

Reverse
The reverse features a stylized rendition of the The Falcon of the Plantagenets surrounded by the text “FALCON OF THE PLANTAGENETS 10 oz FINE SILVER 999.9” and date of mintage. The initials of the artist Jody Clark appear just below shield offset to the left.

The Falcon of the Plantagenets
The Falcon passed to The Queen from the Plantagenet king Edward III. He chose the symbol to embody his love of hawking but it is also closely associated with his great-great-grandson, Edward IV. The white Falcon at The Queen’s coronation held a shield with a badge depicting a second white falcon within an open golden ‘fetterlock’ or padlock. The fetterlock and the falcon were popular emblems in the Houses of both York and Lancaster, as they had descended from Edward III’s younger sons John of Gaunt and Edmund of Langley. The fetterlocks used by John and Edmund were always locked, perhaps to show they had no claim to the throne. Edward IV gave his younger son, Richard, the badge of a white falcon within an open fetterlock – the lock Edward forced to take the throne. Henry VII, who united the houses of York and Lancaster with his marriage to Elizabeth of York, often used a falcon symbol and it was said to be the favourite badge of Queen Elizabeth I.

Buying from BGASC
The 10 oz Queen’s Beast Coins you purchase from BGASC are brand new, brilliant uncirculated silver bullion coins fresh from The Royal Mint of Great Britain. Each coin comes encased in a mint-issued hard plastic coin capsule. BGASC always handles your coins with the utmost care and respect, as if we were collecting them ourselves. If you have any questions about these coins or the purchasing process, feel free to call us toll-free and one of our representatives will be happy to assist you.