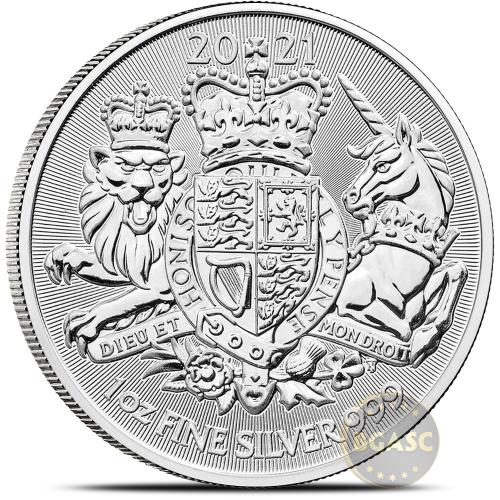 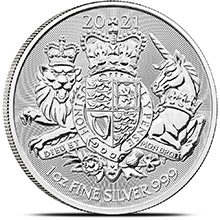 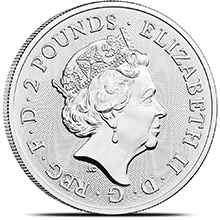 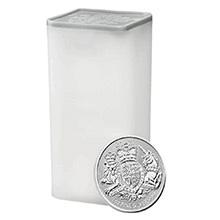 This 2021 1 oz Silver Great Britain Royal Arms bullion coin from The Royal Mint features the Royal Arms, a symbol of strength and majesty. The traditional design is depicted on 1 troy ounce of .999 fine Silver, and is the newest addition to The Royal Mint Silver bullion range.

Display your 1 oz Silver Royal Arms coin in style by adding a velvet gift box to your order.

Obverse
The obverse features the 5th definitive coinage Portrait of Queen Elizabeth II, surrounded by the text “ELIZABETH II • D • G • REG • F • D • 2 POUNDS”. DG REG FD is an abbreviation of the latin “Dei Gratia Regina Fidei Defensor” meaning; “Grace of God, Queen, Defender of the Faith” and is a form of the Style of the British sovereign of Queen Elizabeth II common on coins of the Pound Sterling. The initials of the artist Jody Clark appear just below the portrait.

Reverse
The iconic Royal Arms design by Eric Sewell has been reinterpreted on this 2021 bullion coin by coin designer Timothy Noad. The Royal Arms quartered shield depicts three passant guardant lions of England featured in the first and fourth quadrants, and in the second, the rampant lion and double tressure flory-counterflory represents Scotland. The third features a harp for Ireland. The shield is supported on one side by the crowned English lion and the other by the Scottish unicorn, and has a Garter circlet surrounding it, inscribed with “HONI SOIT QUI MAL Y PENSE” (shame on he who thinks evil on it). Also featured is the leek of Wales.

These 2021 1 oz Silver Royal Arms Bullion Coins are brand new from The Royal Mint, stored in unopened boxes until ordered. You may order these coins in any quantity. Quantities of 25 are shipped in unopened mint-issued tubes. Smaller quantities of coins are individually packed in protective coin flips. BGASC always handles your coins with the utmost care and respect, as if we were collecting them ourselves. If you have any questions about these coins or the purchasing process, feel free to call us toll-free and one of our representatives will be happy to assist you.