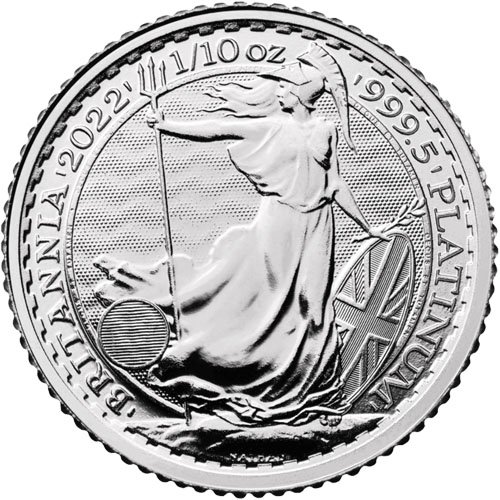 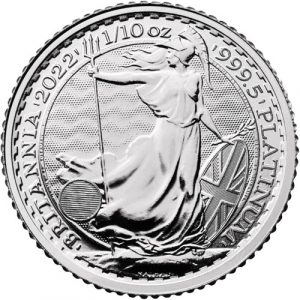 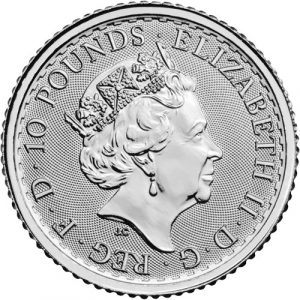 Introduced in 2018, the British Britannia Platinum Coin is the latest iteration of the popular Britannia bullion series from the Royal Mint. This unique collection debuted with 1/10 oz platinum coins, an option not widely available in other platinum bullion programs. Today, you have the chance to get 2022 British Britannia 1/10 oz Platinum Coins online.

On the obverse of 2022 British Britannia Platinum Coins is an effigy of Queen Elizabeth II. Her Majesty is shown here in right-profile relief wearing the George IV State Diadem Crown. This portrait was created in 2015 by Jody Clark and depicts the Queen at the age of 89. Inscriptions on this side read 100 POUNDS, ELIZABETH II, and D.G. REG F.D.

The reverse face of 2022 British Britannia 1/10 oz Platinum Coins comes with Philip Nathans effigy of Britannia. Her imposing figure stands guard along the British coast with a Union Jack shield, trident in hand, and a Corinthian helmet on her head. The design field comes with inscriptions of BRITANNIA, 2022, 1/10 OZ, 999.5, and PLATINUM.

Britannia has been a symbol of the British people and Britain since the time of Roman occupation of the British Isles. The first coin released with an image of Britannia was issued during the reign of Emperor Hadrian in 87 CE. Her effigy has featured continuously on British coins since the late-17th century.