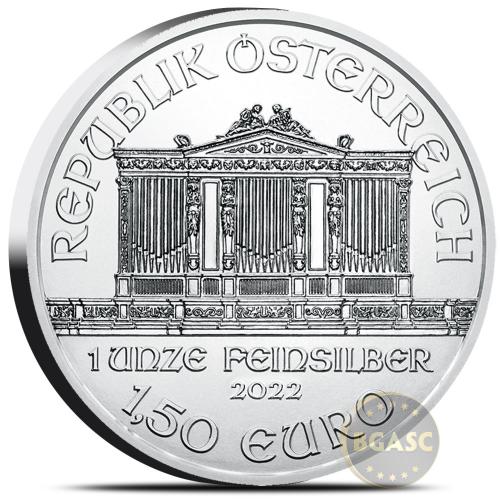 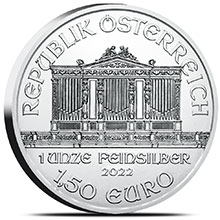 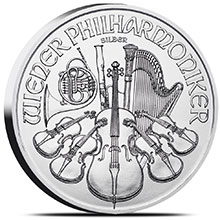 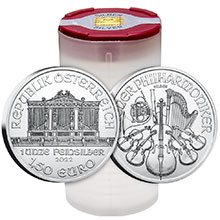 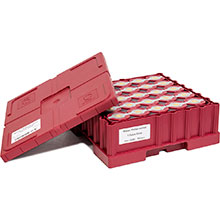 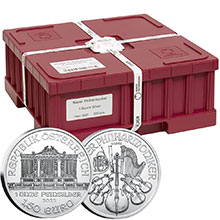 The 2022 Silver Austrian Philharmonic Bullion Coin contains one troy ounce of .999 fine silver. Like its gold counterpart, the silver coin depicts a harmonious assortment of musical instruments, including a string bass, cellos, violins, a bassoon, a harp and a Viennese horn, on its reverse. The obverse of the coin shows the great organ of the Musikverein concert hall in Vienna, the Vienna Philharmonic Orchestras home, as well as the denomination/face value, weight, and year of issue. Another feature that sets this beautiful coin apart is its mirror-like smooth edge. Quantities of 20 ship in mint tube.

Coin History and Design
From November 1998 on, a change in Austrian law permitted the issue of pure gold coins for investment purposes. This is how the idea came about to design a gold coin that symbolized Austria. Numerous possible themes for the coin were discussed until finally the vote was given to music, a harmonious ambassador whose language is understood the world over. And what better to symbolize music than the world famous Vienna Philharmonic Orchestra? The runaway success of the world famous Vienna Philharmonic bullion coin is not only limited to its golden manifestation. Struck in pure silver, the silver Vienna Philharmonic has also proved to be a massive hit with investors.

The coin was designed by Thomas Pesendorfer, the Austrian Mint’s chief engraver. For the reverse side he chose eight characteristic orchestral instruments: four violins either side of a cello in the foreground and the Viennese horn, the bassoon and the harp behind. The obverse side features the famous pipe organ from the Goldener Saal of the Viennese Musikverein, recognized throughout the world as the backdrop to the Philharmonic’s New Year concerts. The organ case was designed by the architect Theophil von Hansen, who was responsible for the whole building. The original organ was built by Friedrich Ladegast in 1872 and since then the organ has been renovated and replaced on various occasions, the last being in 2011. Visually, the body of the organ remains unchanged despite technical alterations. Above the organ, the words “Republik Oesterreich” stand in a semi-circle, while the weight and denomination of the coin, with the date of issue below, stand beneath the balustrade of the organ.

When the Austrian Mint first issued Vienna Philharmonic coins in silver in February 2008, it was the first time that a European silver bullion coin had been brought on to the market featuring silver of 99.9% purity. The market had long been waiting for a product of these characteristics and within a month of the date of issue, the millionth coin was struck. By the end of 2008, eight million Vienna Philharmonic coins in silver had been sold. Since sales began of 1 February 2008, this silver coin has been struck exclusively in the 1 ounce version and in a quantity that reflects market demand. Several million are sold every year.

The Vienna Philharmonic
There is perhaps no other musical ensemble more consistently and closely associated with the history and tradition of European classical music than the Vienna Philharmonic. In the course of its 175 year history, the musicians of this most prominent orchestra of the capital city of music have been an integral part of a musical epoch which due to an abundance of uniquely gifted composers and interpreters must certainly be regarded as unique.