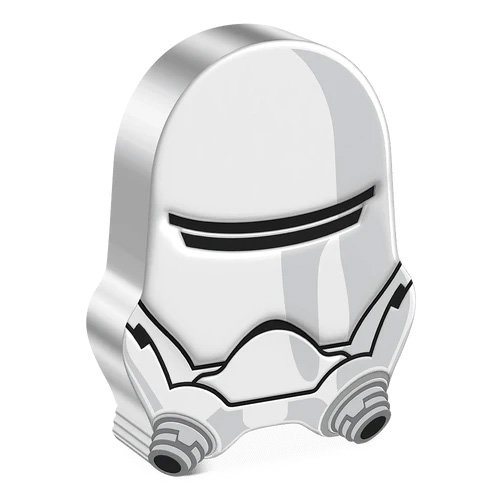 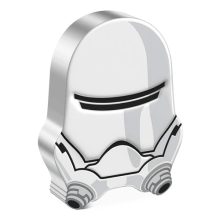 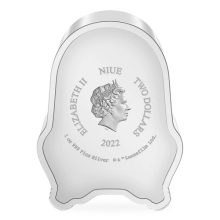 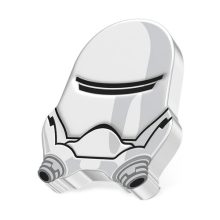 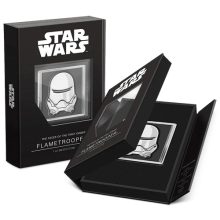 The third trilogy ofStar Warsfilms is set years after the original fall of the Emperor Palpatine and his vast, cruel, and murderous Galactic Empire. The iconic “galaxy far, far away” now finds itself menaced by the First Order, a new fascist movement created from Imperial remnants in the far reaches of space, which brings with it new kinds of armor and weaponry. One of their dread innovations is the Flametrooper, a kind of stormtrooper equipped with a powerful incinerator designed to engulf buildings in high-intensity flame, terrorizing opponents into flight. Their distinctive design appears on the 2022 Niue The Faces of the First Order Flametrooper Shaped 1 oz Silver Coin, available for online sale from BGASC.

The 2022 Niue The Faces of the First Order Flametrooper Shaped Silver Coin reproduces a Flametrooper’s helmet in pure silver. It ships in an officialStar Wars branded box, with a large display window and a Certificate of Authenticity on the back that specifies each coin’s unique number in the mintage.

The obverse side of the coin features Ian Rank-Broadley’s globally recognized effigy of the late Queen Elizabeth II, confirming it as legal tender notwithstanding its unusual shape.

The reverse side is a sculpted rendition of a Flametrooper’s helmet, shaped and colorized with touches of relief that bring a sense of three-dimensional realism to the whole.

One of the most potent assets of theStar Warsfranchise from its beginnings in 1977 has been the visual design of the characters that populate its iconic galaxy far, far away. The armor of the faceless minions of the Galactic Empire and, later, the First Order has always ranked among of the most striking examples of that design work.

Contact the team at BGASC to learn more about any of our listings. Call us at 888-992-4272, talk with an agent at our online live chat, or send an inquiry to our e-mail address.