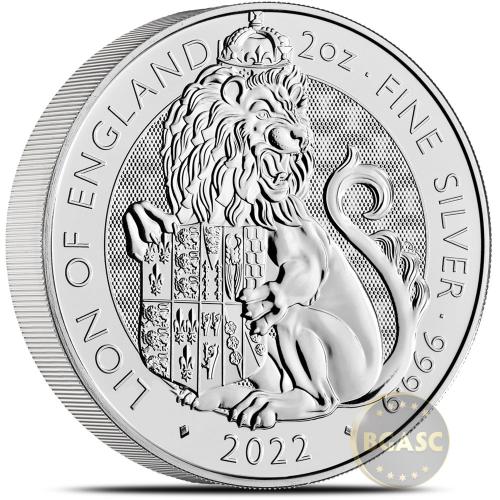 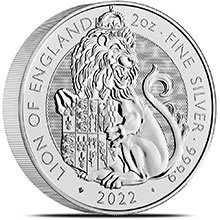 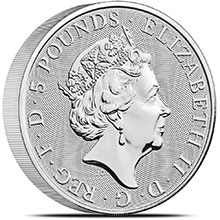 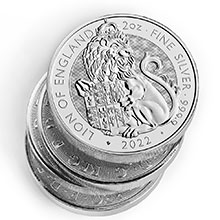 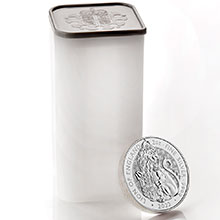 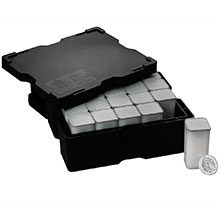 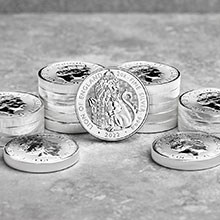 The 2022 Tudor Beasts 2 oz Silver Bullion Coin – The Lion of England is among the first releases of the latest series by the British Royal Mint. This new addition to The Royal Mint’s bullion range takes its inspiration from hundreds of years of royal heraldry.

The Lion of England
A brave and ferocious lion has featured on the shield of England for as long as it has existed. The lion represents English courage, strength, dignity and pride – traits that no animals native to the country at the time seemed to possess. The Lion of England assumed royal beast status in the early twelfth century during the reign of Richard I (1189-99), when heraldry was formally established. Used by Henry VIII as his dexter supporter, which means it appears on the viewer’s left-hand side, the Lion of England remains an iconic heraldic symbol to this very day, and perhaps in modern times is more representative of Britishness rather than Englishness. One of the first beasts to flank the parapets of the Moat Bridge of Hampton Court Palace, the crowned lion supports a shield bearing the impaled arms – a combination of two coats of arms – of Henry VIII and Jane Seymour.

Reverse
The reverse features a stylized rendition of the crowned Lion of England holding a shield surrounded by the text “LION OF ENGLAND 2 oz FINE SILVER 999.9 2022”.

The Tudor Beasts
When the House of Lancaster overcame the House of York following the Wars of the Roses, a formidable dynasty was born. Henry VII, following his matrimonial union with Elizabeth of York to unite the houses, was keen to emphasise the legitimacy of his reign. He looked to the medieval tradition of heraldry to display motifs and symbols wherever possible, reinforcing his rightful position on the English throne to his subjects as well as rival claimants. Henry VIII continued his father’s commitment to legitimising the Tudor dynasty. One such place that heavily features heraldic symbols is Hampton Court Palace – one of the king’s most famous residences and a place he used for pleasure and celebration. Ten stone beasts line the Moat Bridge, representing the lineage of Henry VIII and his third wife, Jane Seymour. Consisting of real beasts and mythical creatures, we are honouring these heraldic symbols of one of the nation’s most powerful dynasties with The Royal Tudor Beasts Collection.

Buying from BGASC
The 2 oz Tudor Beasts Coins you purchase from BGASC are brilliant uncirculated silver bullion coins from The Royal Mint of Great Britain. Quantities of 10 are shipped in unopened mint tubes. Single and smaller quantities of coins are carefully pulled from a new mint tube with lint-free, white cotton gloves and placed into their own individual coin flips. You may also want to consider purchasing an X6D38 Air-Tite Coin Capsule to further protect your investment. BGASC always handles your coins with the utmost care and respect, as if we were collecting them ourselves. If you have any questions about these coins or the purchasing process, feel free to call us toll-free and one of our representatives will be happy to assist you.