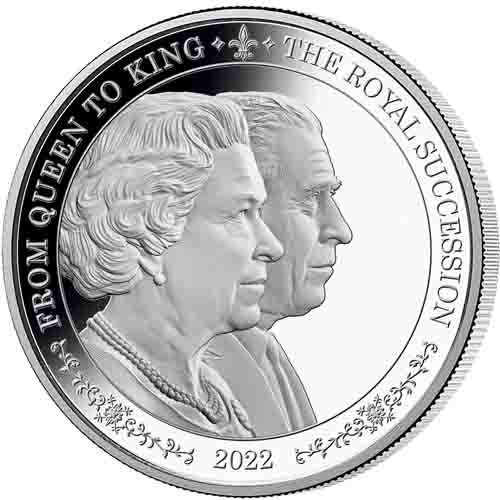 As The United Kingdom ushers in its new monarch, BGASC is pleased to offer a new coin honoring the Royal Succession. With exquisite gold-plated visuals, these coins feature a double portrait of the late Queen Elizabeth II and her successor, King Charles III. Today, you have the opportunity to get 2022 Barbados Double Portrait of Queen Elizabeth II and King Charles 5 oz Silver Coins online.

Each of these 2022 Barbados Double Portrait of Queen Elizabeth II and King Charles 5 oz Coins is recognized as legal tender under the monetary authority of Barbados. An island located in the eastern Caribbean, Barbados is considered an independent British Commonwealth nation. In addition to the coin, you will also receive a display box and a Certificate of Authenticity.

The obverse of 2022 Barbados Double Portrait of Queen Elizabeth II and King Charles 5 oz Coins features the Barbados coat of arms. Adopted in 1966, this image contains a shield propped up by a dolphin and a pelican. Below the shield is the Barbados motto of Pride and Industry. The obverse also contains inscriptions that read BARBADOS, 1 OZ, 5 DOLLARS, AG .999.

On the reverse side of 2022 Barbados Double Portrait of Queen Elizabeth II and King Charles 5 oz Silver Coins, there is a double portrait of Elizabeth II and her son, Charles III. Both are in right-profile relief, with Elizabeth set in the foreground and Charles in the background. Youll see an inscription also that reads FROM QUEEN TO KING, THE ROYAL SUCCESSION, 2022.

In February 2022, Elizabeth II celebrated her Platinum Jubilee, marking 70 years on the throne. This is currently the longest that any monarch has ruled in British history. Then on September 8th, 2022, Elizabeth passed away at the age of 96. As the world continues to mourn the loss of the beloved Queen, it also welcomes the accession of a new monarch, Charles III. Born in 1948, Charles is the oldest to be crowned in the history of Britain.

Please contact BGASC if you have any questions. Our team can assist you at 888-992-4272, chat with you live online, or via our email address.