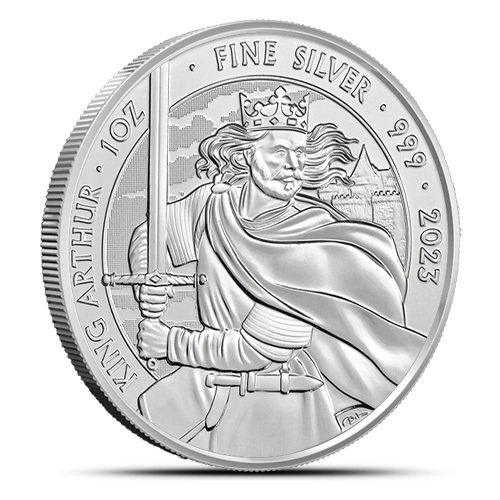 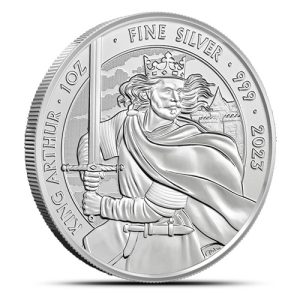 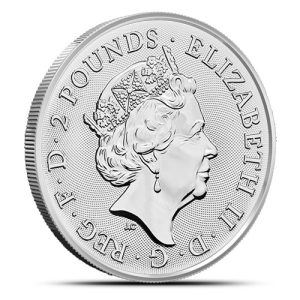 Any quantity available for $7.99 per coin over spot!

There is perhaps no legendary, mythical figure from British culture better known around the world than King Arthur. The mythical Celtic Briton monarch unified ancient Britain and fought back Saxon invaders, ruling over the entirety of his realm from Camelot. Today, you have the chance to get 2023 British King Arthur 1 oz Silver Coins online from BGASC.

King Arthurs tale is set in the late 5th and early 6th centuries in Celtic Britain, but these stories were first told in the 12th century. It was the work of Geoffrey of Monmouth in his Historia Regum Britanniae that included tales of the mythical King Arthur who ruled from his seat of power at Camelot, his primary court.

On the obverse of 2023 British King Arthur Silver Coins, you will find a portrait of Britains modern and longest-reigning monarch, Queen Elizabeth II. Her Majesty is shown here in right-profile relief at the age of 89 wearing the George IV State Diadem Crown. This side of the coin includes inscriptions of 2 POUNDS, ELIZABETH II, and D.G. REG F.D.

The reverse face of 2023 King Arthur 1 oz Silver Coins comes with a depiction of one of Britains other monarchs, though mythical in nature. King Arthur was said to have come to power by removing Excalibur from a stone, a feat no other Briton had achieved. In this design, Arthur is in the heat of battle as he wields Excalibur in his hands while wearing his armor. Inscriptions on this side include KING ARTHUR, 1 OZ, FINE SILVER, 999, and 2023.

King Arthurs tale varies from one version of the legend to the next. Many of those central elements come from Geoffrey of Monmouths story, such as the fact that Arthurs father is Uther Pendragon, a magician named Merlin, and Guinevere, Arthurs wife.

BGASCs customer service is available to assist you at 888-992-4272. Alternatively, you can chat with us live online or email us directly.