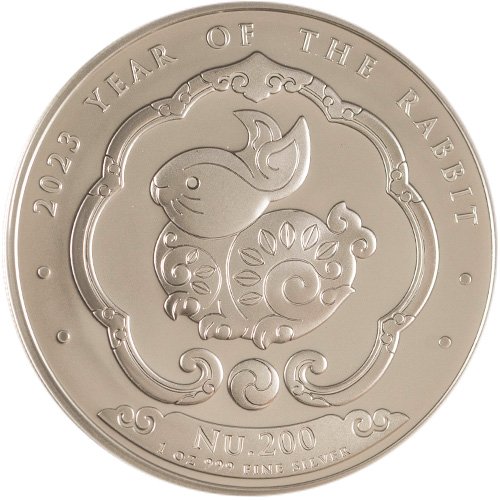 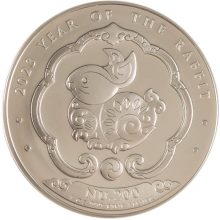 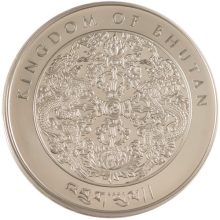 Classical Chinese astrology is the source of the Lunar Zodiac, a group of twelve iconic animals that symbolize specific virtues and personality traits. The Happiest Lunar series, struck by the Singapore Mint, is a celebration of the years of the Zodiac issued by the Kingdom of Bhutan starting in the year 2016. The series’ distinctive design and the quality of its coins have won it a popular following over the years, and the latest issue celebrates the Year of the Rabbit: a sign associated with sociable and gentle personalities, identified with compassion and adaptability but also with a commitment to justice. The 2023 Kingdom of Bhutan Lunar Rabbit 1 oz Silver Coin is available in Brilliant Uncirculated quality from BGASC.

The 2023 Kingdom of Bhutan Lunar Rabbit Silver Coin comes in Brilliant Uncirculated quality that features its original luster, and ships fully insured against loss or damage. Each coin ships secured in an individual acrylic capsule in custom-designed box packaging, and it’s a good idea to early order due to the limited supply in this mintage.

The coin’s obverse side features a stylized Rabbit surrounded by an abstract decorative border, along with the inscription “YEAR OF THE RABBIT” and confirmations of its face value, weight, and silver content.

The peaks of the eastern Himalayas, the Kingdom of Bhutan’s natural scenery, are featured on the coin’s reverse side. It’s accompanied by the inscriptions “KINGDOM OF BHUTAN” and “2023,” the year of issue.

Bhutan was largely isolated from the outside world for much of its history, and the land was a mystery to outside peoples who called it by names like the Hidden Holy Land and The Lotus Garden of the Gods. According to legend, its people were converted to Buddhism in the 8th century by the Guru Rimpoche, but the emergence of a centralized state took place much later, in the 17th century. This eventually became the Kingdom of Bhutan, still very much a distinct society in the 21st century but one which has joined the modern world on its own terms. The Happiest Lunar series features a unique artistic style as a proud representation of the Kingdom’s rich Buddhist cultural heritage and a celebration of what it has to contribute to wider global society.

At BGASC, we’re always standing by to answer questions about any of our listings. Give us a call at 888-992-4272, drop us a line by e-mail, or connect with an agent at our online live chat.