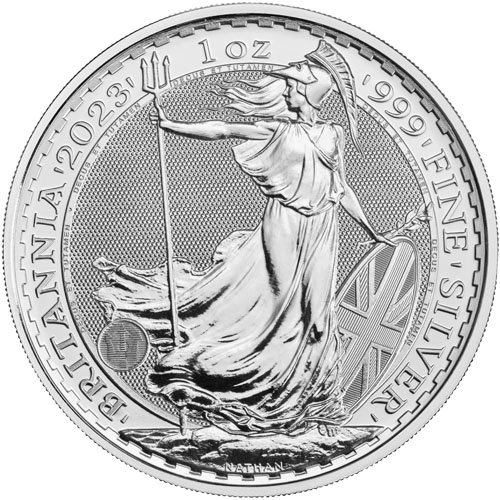 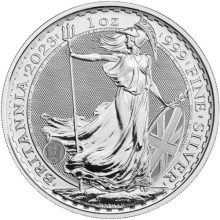 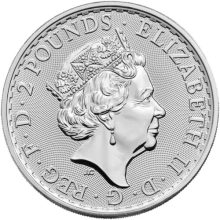 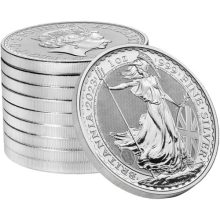 2023 1 oz Britannia Silver Coins contain one full troy ounce of .999 fine silver and have a face value of 2. The Britannia is a stunning British bullion coin issued by The Royal Mint since 1997. Starting in the year 2013 and onward, the Silver Britannia is produced with .999 fine silver (prior to 2013 Britannias are .958 fine.) The image of Britannia, the female personification of the Island of Great Britain, has appeared on UK coinage for almost 2,000 years.

For more than 1,000 years The Royal Mint has innovated to create coins that are both beautiful and secure. In 2023, Britannia, the symbol of Britain, leads the way to redefine security in the bullion market, the embodiment of this drive for the very best in design and security. This latest evolution of an icon takes Philip Nathan’s acclaimed interpretation of Britannia and adds four groundbreaking security features to create the most visually secure coin in the world. These additions both decorate and protect the coin, just as the micro-text that borders the design states – DECUS ET TUTAMEN, or AN ORNAMENT AND A SAFEGUARD. In the lower left-hand of the design, below Britannia’s flowing gown, is a trident to represent her naval history. As the viewer changes their perspective this trident becomes a padlock, emphasising the coin’s secure nature. Surface animation behind Britannia reflects the movement of waves, and fine details like the Union Flag on Britannia’s shield have been highlighted by tincture lines.

Britannia first appeared on the coins of the Emperor Hadrian over 2,000 years ago. As the Roman Empire expanded, conquered provinces were personified with female figures; a means to establish order and create a sense of unity.

Restored to British coinage in 1672 during the reign of Charles II, she’s appeared on the coins of every subsequent monarch. Reassuring and resolute she’s a rallying point come crisis or celebration, an embodiment of our national pride. Instantly recognisable all over the world, Britannia resonates with international investors, a trusted symbol of the quality of British minting.

The Royal Mint is proud to present the 2023 Britannia coin featuring Philip Nathan’s classic design. Standing firm in the eye of the storm, she displays an unyielding resolve. Since it was chosen to adorn the very first Britannia bullion coin in 1987, it has been acclaimed as a modern masterpiece.

Composition
Silver Britannia bullion coins contain 1 troy ounce of .999 fine silver. Because the Silver Britannia has a face value of 2 GBP and is a legal-tender bullion coin with its weight, content, and purity guaranteed by the British government, this coin is eligible to be held in individual retirement accounts (Precious Metals IRAs).

These 2023 Silver Britannias are brand new from the Royal Mint, and stored in mint-sealed boxes until ordered. You may purchase sealed monster boxes of Silver Britannias from us (500 coins) or you may order them in any other quantity you’d like. Quantities of 25 are shipped in unopened mint tubes. Single and smaller quantities of coins are carefully pulled from a new mint tube with lint-free, white cotton gloves and placed into their own individual coin flips. BGASC always handles your coins with the utmost care and respect, as if we were collecting them ourselves. You may choose to add an H40 Air-Tite Coin Capsule to your order to further protect your investment. Silver Britannia gift boxes are also available. If you have any questions about these coins or the purchasing process, feel free to call us toll-free and one of our representatives will be happy to assist you.