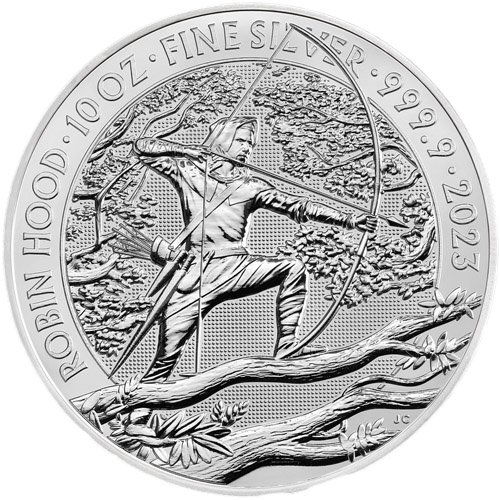 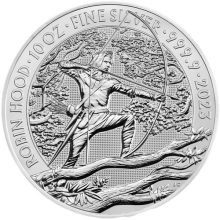 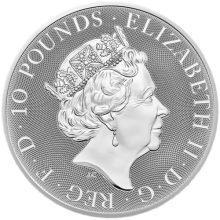 The Royal Mint has a stellar track record when it comes to the production of both high-quality investment coins and collectible bullion pieces. One of its newest collections is the Myths and Legends Series. Following its 2021 debut, the series now has expanded options in 2023 with a new 10 oz silver coin. BGASC now has 2023 British Robin Hood 10 oz Silver Coins available to you online.

When you purchase one of these 2023 British Robin Hood 10 oz Silver Coins online from BGASC, you will receive a coin that is housed individually in an acrylic capsule or in boxes of 15 silver coins. All of these specimens are in Brilliant Uncirculated condition.

For the obverse design of the 2023 British Robin Hood Silver Coins, the Royal Mint features a depiction of Her Majesty, Queen Elizabeth II. The Queen is shown here in the fifth-generation portrait for British coins in a 2015 design from Jody Clark. This design shows the Queen in right-profile relief at the age of 89 wearing the George IV State Diadem. Inscriptions on this side include 10 POUNDS, ELIZABETH II, and D.G. REG F.D.

In the reverse design element, the 2023 Robin Hood 10 oz Silver Coin comes with an image of Robin Hood. The famed thief of Sherwood Forest is shown kneeling on the branch of a large tree as he takes aim with his bow and arrow. Inscriptions on this field read ROBIN HOOD, 10 OZ, FINE SILVER, 999.9, and 2023.

Robin Hood is one of Britains most popular and famous folk heroes. Rumored to have fought in the Third Crusades alongside King Richard I, Robin returns to Britain to find Prince John and the Sheriff of Nottingham have taken control of both the kingdom and the purse strings of the crown. To fund a lavish lifestyle, Prince John is heavily taxing all Britons and Robin begins to fight back, redistributing wealth as he goes.

If you have any questions, please feel free to contact BGASC. Our customer service team is available on the phone, on the web via our live chat feature, and through our email address.