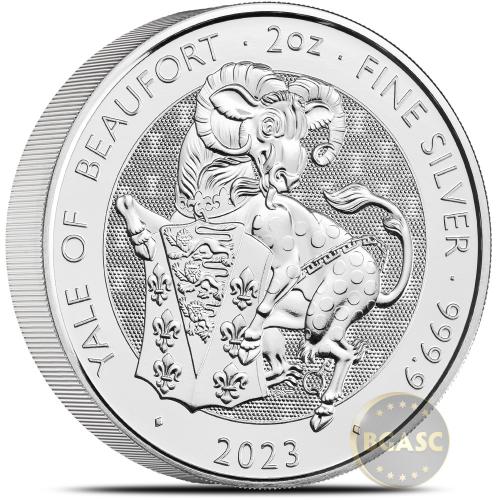 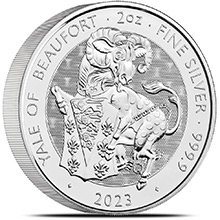 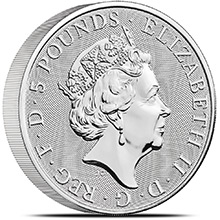 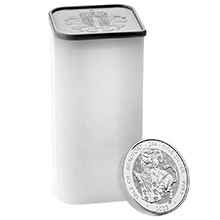 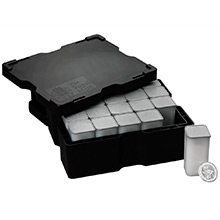 Any quantity available for $6.69 per oz over spot!

With your purchase of the 2023 2 oz British Silver Tudor Beasts Yale of Beaufort Coin online at BGASC, you will receive a coin that is packaged individually in a protective flip. Multiples will ship in plastic tubes of 10 coins or boxes of 200 silver coins, with a total of 20 tubes of 10 coins each in the box. All coins are in Brilliant Uncirculated condition.

Queen Elizabeth II is on the obverse side of 2023 British Silver Tudor Beasts Yale of Beaufort Coins. This effigy of the Queen is the fifth of her reign and was designed in 2015 by Jody Clark. In this design, she is shown at the age of 89 wearing the George IV State Diadem. Inscriptions on this face of the coin include 5 POUNDS, ELIZABETH II, and D.G. REG F.D.

In the reverse design of the 2023 2 oz Silver Tudor Beasts Yale of Beaufort Coin, the Royal Mint offers a depiction of the Yale of Beaufort. Here, the beast is shown standing on its hind legs as its front legs are draped over a shield with the Arms of Jane Seymour. The inscriptions include YALE OF BEAUFORT, 2 OZ FINE SILVER 999.9, and 2023.

The Yale is a mythical beast with the body and head of a goat, the tusks of a boar, and the tale of a lion. It was associated with the powerful Beaufort family and given to Jane Seymour, King Henry VIIIs third wife, to solidify her authority as the kings wife.

If you have any questions, please dont hesitate to ask. BGASC customer service is available on the phone at 888-992-4272, online using our live chat, and via our email address.