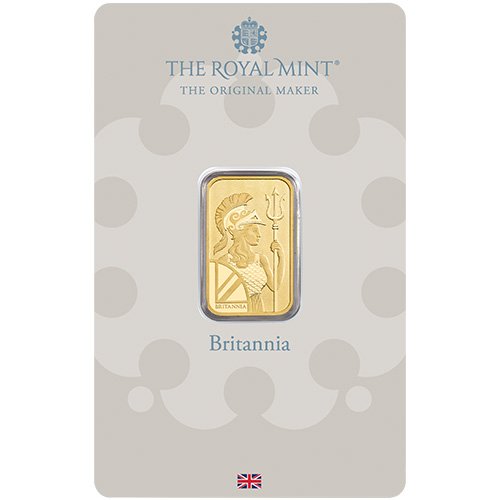 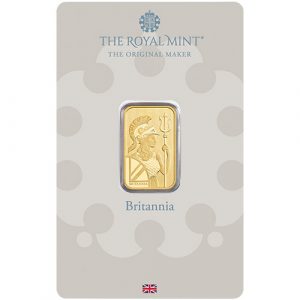 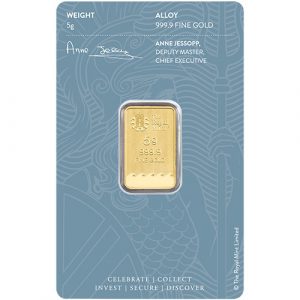 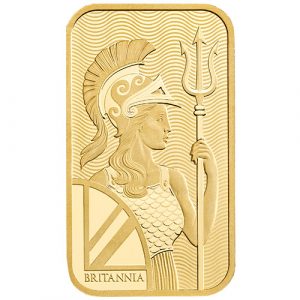 Any quantity available for $35.69 per bar over spot!

BGASC proudly offers the British Britannia bar to investors and collectors in a variety of sizes. Here you will find one of the smaller editions of this bar, packaged inside its standard blister card with an assay. Coming in at just five grams, these beautiful bars are a nice option for those in search of more affordable gold buying opportunities. Today, you have the chance to purchase 5 Gram British Gold Britannia Bars online.

When you order 5 Gram British Gold Britannia Bars in this online listing, you will receive a brand-new product housed inside elegant blister card packaging. These cards display the Royal Mint seal and the British flag across the front, while containing assay information on the back side.

On the obverse of 5 Gram Britannia Gold Bars, there is a rendering of the Roman deity known as Britannia. This design is credited to Jody Clark, who is perhaps most notable for his effigy of Queen Elizabeth from 2015. Here, Britannia is shown in right-profile relief wearing a Corinthian helmet and holding a trident and shield.

The reverse side of British Britannia Gold Bars contains the hallmarks of the bar as well as the Royal Mint seal. The hallmark inscriptions read 5G, 999.9 FINE GOLD. Above these details, you will find the mint seal, which contains a quartered shield and the words THE ROYAL MINT. Other details on the reverse include a wave depiction and a backdrop of swirling lines.

Led by Julius Caesar, Rome conquered the British Isles in 43 AD. This resulted in the Roman province known as Britannia. Shortly after, the goddess Britannia, bearing many similarities to the Roman deity Minerva, began appearing on coins minted in the newly conquered land. After the Fall of the Roman Empire, Britannia largely disappeared from the culture until the reigns of Elizabeth I and Charles II established the return of Britannia to the regions culture and coinage.

Please dont hesitate to contact BGASC with your questions. We are available to you at 888-992-4272, online through our live chat, and by using our email address.