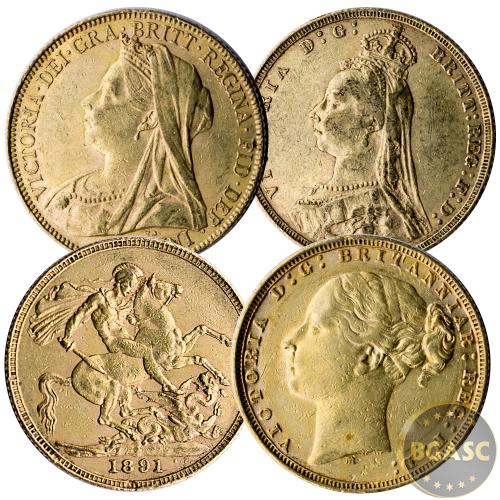 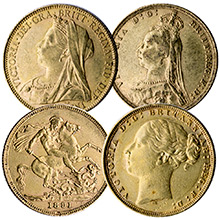 These Circulated Queen Victoria Gold Sovereign Coins (Random Year) have been previously owned and/or circulated, therefore have scratches, nicks, scuff marks, or other surface marks. Secondary market Gold Sovereigns such as these contain .2354 troy ounces of fine gold and have been tested for gold content and purity. The date on these coins will be chosen at random from our available inventory, ranging from 1871-1901. (Other dates/obverse portraits may be available in a separate listing.)

The Gold Sovereign coin from The Royal Mint offers a sense of luxury, history and symbolism that no other bullion coin can match. With its bold St George and the Dragon design, it has become an internationally recognized symbol of unrivaled accuracy, integrity and strength. Each Gold Sovereign is struck to the same precise standard as every Sovereign since 1817. A circulating coin, it was struck in 916.7 fine gold to withstand daily use and it is struck from that same durable, 22 karat gold today. Adorned by the renowned engraver Benedetto Pistrucci’s iconic Saint George and the dragon design, which has endured for 200 years.

Pistrucci’s interest in St George had been aroused by Lady Spencer, to whom he had been introduced by Sir Joseph Banks, President of the Royal Society and friend of William Wellesley Pole, then Master of the Mint. Her Ladyship showed Pistrucci a wax model of Saint George and asked him to make another ‘in the Greek style’. Lady Spencer had no time for a figure dressed in gothic armour, an appealing sentiment to the Italian, whose favorite maxim was said to be ‘study Greek originals day and night’. Pistrucci’s iconic design first appeared on The Sovereign in 1817, instantly distinctive it became a classic and still endures 200 years later.

Each coin is packaged and shipped inside of a protective coin flip.