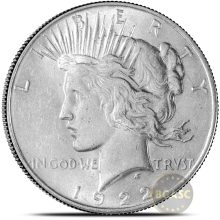 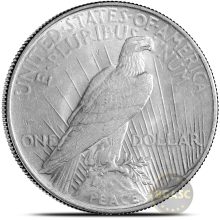 The Peace Silver Dollar is an aptly named coin given the public drive that resulted in its creation in the first place. The 1918 passage of the Pittman Act forced the United States Mint to restart striking millions of silver dollars. The Morgan Silver Dollar design was used again for the first time since 1904, but Americans wanted to see a new design that memorialized the hard-won peace of World War I.

This design from Anthony de Francisci captures a peaceful, hopeful view of Liberty in left-profile relief. She wears a crown with tall points and the word Liberty is inscribed along the top of the coin. In God We Trust features on either side of her neck and the date mark is found below.

Even the reverse design of the Peace Silver Dollar reflected the desire for a peaceful design. Here, the American bald eagle is at rest on its perch on an olive branch. The rays of sunshine from a new day emanate from the lower-right corner as the bird looks out to the future. United States of America and E Pluribus Unum are inscribed at the top. One Dollar is featured on either side of the eagle and Peace is inscribed at the very bottom of the design.

These Peace Silver Dollar coins feature date marks from the common 1922-1928 range and the 1934-1935 range. Each coin is in Very Good to Extremely Fine condition, indicating that each is well worn but has a clear design with flat, lacking details. XF coins are higher on the quality scale, with wear present only on the highest points and traces of mint luster possible.